Attendance: The number of children attending the Centre increased to 37 from 23 at the beginning of 2015. With this increase, there were two physiotherapists in attendance and the social workers followed up with home based care.

Sixteen of the children were supported by Liliane Foundation through SWEB Foundation.

Health: 20 of the children had health problems during the year and some were hospitalized for up to six weeks.

Joshua Tagoe aged 3 with Hydrocephalus underwent a series of medical tests in preparation for surgery at the Korle Bu Neuro Clinic. He went into crisis on 26thAugust and was rushed to the Police Hospital because of the doctors’ strike at Korle Bu. He was discharged on 30th August, unfortunately, died on 31st August and was buried the same day with the assistance of the Assemblyman.

Education: Of the 16 children being supported by Liliane Foundation through SWEB Foundation, four are in mainstream schools including one, who is is a boarder at the Akropong School for the Blind. Elizabeth Brock was promoted to KG 2 and her performance was encouraging. Ruth O. Otoo participated in the school’s Africa Day Celebration.

Micheal Donyo’s placement in school was deferred to 2016 because of poor health. 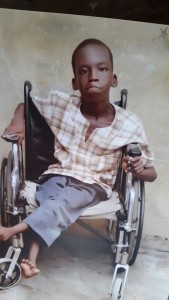 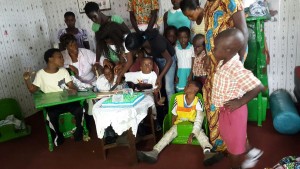 World Cerebral Palsy Day was observed with dental screening and treatment in collaboration with the University of Ghana School of Medicine and Dentistry.

The Centre participated in a day’s seminar organised by the All African Disability Centre in Tema Community 2. Three families joined in the annual retreat by Joni & Friends from USA at Abokobi.

Marvin Nii Odoi Yemofio celebrated his 5th birthday at the Centre with other children, staff and parents.

A Christmas party was organized on 24th December with drinks sponsored by Kasapreko and a walk took place on December 26th to end the year’s activities.

Parents’ Support Group: A parents’ support group has been formed by parents of Sharecare children. The group met with a team from SWEB Foundation led by the CEO to discuss the outcome of research carried out in which the daily activities of their children were photographed. The group decided to start a day care programme and income generating activity – liquid soap making..

On 24th November, 2015 the group met a team from SWEB and YEBEGO of the Netherlands and presented a proposal for the planned activities and samples of the liquid soap.

Donations: Owing to the awareness creation and advocacy an opinion leader in the community donated electricity credit to the Centre for three months as his contribution towards the Centre’s activities. The MacCarthy family whose child passed away after a health challenge, donated physio equipment worth eight thousand pounds (₤8000) to the Centre. KATASolar Ltd. installed a solar system for the Centre’s lighting with a promise to cover the fans and other equipment in due course. Aviation Alliance enabled seven children to attend the Centre for their therapy. 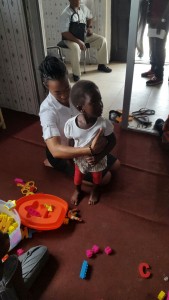 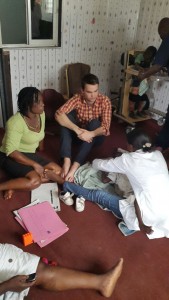 Internship and field work: Nine students from three universities – University of Ghana, KNUST and University College of Education, Winneba – interned at the Centre.

They were assigned to families and saw to the registration and renewal of the children’s NHIS cards, 2% District Assembly Common Fund and assisted parents to take their wards to hospital. Sharecare gave them gifts of appreciation on their last day.

A number of visitors also walked in to volunteer time with the children.

Others: Mercy Holm, aged 3, suffered Traumatic Brain Injury (TBI) through a stampede at the Independence Square. Her condition was delicate and needed urgent attention. This compelled Sharecare to raise funds for an MRI test which may lead to surgery.

The Centre recorded two deaths; one a care giver and the other a child. They have both been buried.

As part of partnership with government agencies, Zone ‘B’ of the Social Welfare Department visited the Centre to encourage parents in their tasks and what they are doing for their children.

Challenges: The Centre has insufficient assertive devices which would help the children with home-based care. This lack is evident during the feeding of the children. Other devices like gaiters, corner seats, parallel bars and standing frame are also needed.

Successes: Although there have been challenges, some improvements in the children were seen by their parents.

Ephraim can now control his neck over two minutes and roll over.

Marvin can now control his neck for five minutes, relax his fingers and can also roll himself.

Nii Darko is trying to walk when given support and also to wash himself when asked to.

Yaw Oteng is making steps in a hurried manner.

Enam Vondee is trying to eat by herself.

Oswald made a significant improvement.

Emmanuel Donkor can now move with a walker.

Appreciation: The Centre Manager, staff and physiotherapists thank all mothers who through their commitment made these gains, although it wasn’t easy. Thanks go also to the therapists who through their love, encouragement and respect they have for the parents and children helped to achieve these successes.

We say a big thank you to SWEB Foundation, Liliane Foundation, Aviation Alliance, United Way Ghana, Sharecare management and other organizations and individuals that have brought us this far.